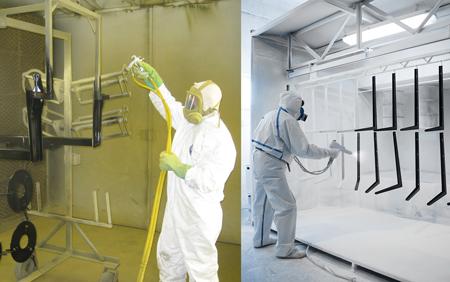 Almost all metal fabricators consider on-time part delivery a key metric. In today’s just-in-time manufacturing environment, the parts need to be there so the customers don’t miss a beat in their own manufacturing facilities.

To maintain their ability to get parts where they need to be and when they need to be there, more fabricators are investigating in-house finishing capabilities. They know that once metal parts leave the shop to receive a liquid or a powder coating, they have lost their ability to guarantee a delivery date. It is quite literally out of their hands.

Now, a finishing contractor may be a good supply chain partner, but a metal fabricator is one of its many customers—perhaps one of the smaller ones. If the custom coater needs to clear the production schedule for one of its largest customers, guess where that leaves the small batch from the metal fabricator?

Metal fabricators looking to take on finishing should know about two of the most common finishing alternatives—liquid and powder coating—and the requirements involved for a company hoping to apply one or both.

What Makes up the Coating?
Liquid. The basic raw materials comprising a liquid coating are additives, carriers, pigments, and resins. Additives make up the smallest portion of any liquid coating composition, but they impart special characteristics on the overall finish; for example, they might assist with rust prevention or UV protection. The carrier is the main liquid used to formulate the paint. The carrier can be water, solvent, or a combination of the two. Liquid coatings heavy in solvents traditionally have been the dominant form of liquid finish applied to metal parts over the years, but more interest has been directed to waterborne and high-solids coatings, which release a minimal amount of volatile organic compounds (VOCs) during application when compared to traditional solventborne coatings. Pigments play a role in final appearance and performance to some extent. As a rule, the volume of pigments influences the gloss of the film. The more pigment present, the lower the coating’s gloss. Resins act as the base of the liquid coating. They primarily govern the overall performance of the coating, helping the paint to excel for particular applications.

CS Unitec – Metalworking Solutions
Powder. Powder coatings don’t require a carrier. The additives, pigments, and resins are formulated in a powder form. To apply the material to parts, the powder is electrostatically charged and conveyed via compressed air. The charged powder is attracted to a grounded part. The part is then taken through an oven, where the heat changes the powder from a solid to a liquid and then to a solid coating. Generally, powders do not have any or extremely low VOCs.

How Does the Coating Affect the Environment?
Liquid. Solventborne coatings are often specified for a finish because of their dependable performance and ability to air-dry in a matter of minutes. Unfortunately, most of the traditional liquid paint formulations from yesteryear no longer are around because of the need to reduce VOCs emitted during application.

That has led to the development of more environmentally friendly coatings, such as new waterborne formulations and high-solids coatings, that emit low VOCs. The waterbornes, which have come a long way from the early versions used 15 years ago, are slowly growing in acceptance. However, some manufacturers still have reservations about applying a water-based product directly to metal. High-solids are liquid coatings that have a solids content of at least 65 percent, which means minimal solvents are present. But fewer solvents also means that the coating is more viscous. That has led to the development of multipart application systems (referred to as 2K systems if two parts are mixed, 3K if three parts are mixed, etc.) that are formulated to be mixed only seconds before application.