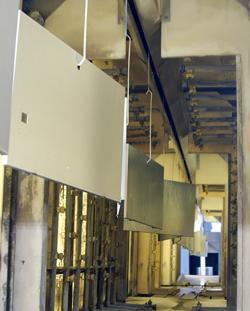 Complete coverage of powder coating is always a worthwhile goal, both in terms of application and knowledge about the subject.

More metal fabricators are finding themselves in a position where they are expected to take on responsibility for finishing metal parts. Either OEM customers want them to take on powder coating activities, or at the very least they want the shops to coordinate the finishing process in addition to the fabrication.

Of course, in this economy, many metal fabricators aren’t in a position to say no to such requests. Fortunately, powder coating technology has advanced to the point where it’s more user- and production-friendly than ever.

It’s one of the younger metal finishing technologies on the marketplace, having appeared on the manufacturing scene in a large way in the 1970s. The technology grew rapidly in the 1980s as key industry segments, such as appliance and architectural, gravitated to it, and powder coating usage grew with international expansion in the 1990s. The growth of the technology is not as robust as in past decades, but this lull has put pressure on the material and application equipment sector to develop new products in an aggressive manner.

CS Unitec – Metalworking Solutions
The basic premise for powder application remains the same. Dirt, oils, and lubricants have to be removed from the material with chemicals, which also help prepare the metal surface for powder application and improve powder adhesion. These pretreatment chemicals usually are applied in a spray process, but sometimes a submersion method with several tank stages is used. Once the parts are dried (see Figure 1), they enter a booth where an application gun shoots electrostatically charged particles at the grounded metal parts (see Figure 2). The powder adheres to the parts as long as electrostatic charge remains on the powder, which is usually more than enough time for the parts to travel to a curing oven. The oven provides the elevated temperature necessary to melt the powder and cause the material to flow out, creating a skin over the metal part.

The powder coating industry is not one marked by regular technological revolution, but that doesn’t mean noteworthy advancements haven’t taken place over the last five to 10 years. Here are five developments you should be aware of if your company is increasing its involvement in powder coating.

Why do municipal water treatment facilities have phosphates on their check list? Call it cultural eutrophication. Eutrophication is the word that describes the aging process for a body of water. Plant life eventually emerges in a body of water, and through a combination of dead plant matter and more sediment, the body of water grows more shallow over time, usually hundreds of years. Phosphates, which can be found in human and animal waste, household cleaning compounds, agricultural fertilizers, and industrial waste, hasten this aging process. The phosphates have a “steroid” effect on the aquatic vegetation, and the plant life chokes the life out of the body of water.