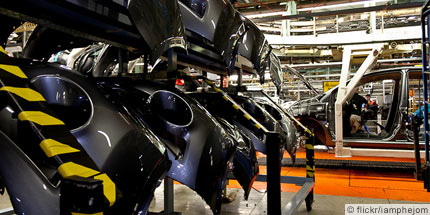 Good Times For Auto Suppliers in Ohio. For many companies that remain links in Northeast Ohio’s automotive supply chain, the good ol’ days seem to be on their way back.
Higher vehicle sales, plus decisions by Japanese carmakers to rely on more onshore companies to supply their U.S. plants after they suffered through disruptions caused by last year’s tsunami in Japan, are improving suppliers’ prospects here. A reduction in the number of competitors also is helping those still in business.
Cars and light trucks are selling at a brisk pace that could see 14 million vehicles sold in the United States this year, according to industry analysts polled recently by Automotive News, a sister publication of Crain’s Cleveland Business. Some of those experts are raising their projections and are calling for the sale of as many as 14.8 million vehicles this year, with sales rising to about 16 million units in 2014.
Sixteen million is a bit of a magic number for the industry, because U.S. vehicle sales were at or above 16 million units from 2000 to 2007. But even 14 million is a big improvement over a dismal 2009, when only 10.4 million vehicles were sold in the United States. Sales totaled 12.8 million vehicles in 2011.
But other factors also are benefiting U.S. suppliers, and some say the current environment seems better than it did at the height of the boom, when credit was easy, jobs were plentiful and Americans were in a car-buying state of mind.
“It feels better than 2006 because there is more attention toward localization,” said Jeff Walters, president of Master Products in Cleveland.
Master Products makes dampers, steering components and parts that end up in shocks that go into vehicles made in the United States. That includes vehicles made by Japanese car companies with U.S. production plants, such as Honda in Marysville, Ohio, near Columbus. Mr. Walters said his company and others are benefiting from a trend toward localization that began when the tsunami hit Japan in March 2011.
That disaster not only cost Japan a terrible toll in human suffering, but it also knocked out of commission many Japanese plants that were supplying U.S. auto factories owned by Toyota and other Japanese carmakers. Some U.S. plants were down for extended periods because they could not get the parts they needed to complete their vehicles.
In the tsunami’s aftermath, Japanese automakers have sought to find new suppliers closer to their operations in the United States, providing more business to companies such as Master Products, Mr. Walters said.
Rivals fall away
Jerry Zeitler, president of Cleveland-based Die-Matic Corp., said his auto business definitely is up. He cites two reasons: There are fewer suppliers than there were five years ago or so, and there are more U.S. auto plants to supply.
“I can think of at least six companies in the Greater Cleveland area that closed in the last four years,” Mr. Zeitler said, referring to now-shuttered suppliers such as Dickey-Grabler Co., some of which were his competitors.
On the plus side, U.S. auto companies are stronger today than they were in previous decades, with healthier profit margins and new products requiring new parts, Mr. Zeitler said. Also, auto companies from other nations, including Korea, have been opening plants in the United States and need parts, he said.
“I don’t think anyone could have predicted the explosive growth and success the South Korean OEMs (original equipment manufacturers) have had in the last three to four years,” said Mr. Zeitler, whose precision stamping company also makes parts that go into medical devices and other products.
“Few of us wanted to do business with them five years ago — the prestige and volume wasn’t there like it was at GM or Chrysler,” he said. “My, have things changed.”
Beware the vortex
Does all of this mean that area auto suppliers are content and free of worry? Hardly — “worry free” and “auto supply business” are not words most of them use in the same sentence. Business is good now, they say, but they’ve seen how quickly the industry can go into a tailspin and are braced against that happening again.
Bill Adler, president of Stripmatic Products in Cleveland, said he’s seeing increased demand for the parts his company makes for automotive shocks, struts and other components. Mr. Adler said his sources tell him business will continue to improve, but he’s still cautious.
“We are seeing strong forecasts and expect it to continue as long as gas doesn’t go above $4.25 to $4.50 a gallon,” Mr. Adler said.
Likewise, Mr. Walters of Master Products said he likes his auto business, but he’s still “always looking for Plan B” because he knows how cyclical it can be. Also, the ground beneath the industry constantly is changing. Japanese automakers are moving their supply chains to the United States, but they could build their own supply plants here as well, he said.
Mr. Zeitler advises others to enjoy making money from the auto industry, but he warns them not to depend upon it too heavily.
“I think companies like us have to be diverse, flexible and financially conservative in order to respond to the ever-increasing economic changes and swings in the global market,” Mr. Zeitler said. “Just because automotive is seemingly healthy and rebounding, we can’t get sucked back into the volume vortex. It’s easy to do, and we Americans have short-term memories.”

Design For Manufacturability from the start